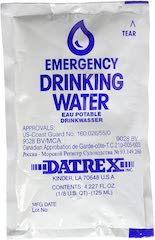 Hydration packs for clean drinking water on the move.

Keeping your fluids up when in trying situations and hot temperatures is vital to your survival and there should be no compromise when choosing how and what to carry your water supply in. Things have moved on from the standard-issue water bottle, and we now have a big choice of water carrying systems that integrate with your load carrying the pack and spread the load of the water across your back and shoulders.

These water collection methods have been used by nomadic peoples for centuries; some can be applied in more than one type of climatic region.

Temperate regions
These regions are the easiest regions to find water; because of the abundant rainfall and residual moisture water can be collected from the living plants and trees and even the ground in many interesting ways: Please read our blog article all about this: Draining fluid from plant matter, dew capture & how to make a solar still.

Desert
Although water is scarce in the desert, there are only a few extreme deserts in the world that are totally devoid of water. Less extreme deserts, receive some infrequent, erratic rainfall. This is soon drained up by all the other life forms surviving from it giving it a little time to collect anywhere on the surface. If you are lucky enough to witness rainfall, collect as much as possible as quick as possible in as many ways as you can think of, otherwise, you will have to dig for it. The lower land ways, ravines, and dips are where the water ends up, it is quickly absorbed and collects under the surface away from the suns evaporating rays, and these are the places to dig to look for water. Some cacti store a thick liquid held in by their waxy skin, it is safe to drink and could save your life.
A Solar still is a good method of collecting water in the desert, where the days are hot and nights are cold.

Plains
It is quite difficult to find water in the vast plains. Veins of water created by passing rainstorms or the summer snowmelt of surrounding mountains, do run through and sometimes collect in the lower areas. These disappear quickly sometimes absorbed into an underground layer of permeable rock called aquifers where it is held.
Draining fluid from plant matter. In the dry arid plains and grasslands, roots are far-reaching to find water and relatively close to the surface. Dew capture, another method that can be applied in the plains in the brief moment of dew formation at dawn. Solar still, another good method of collecting water in the plains, where the days are hot and nights are cold.

Tropical and Sub-Tropical regions
Cut through A plantain or banana trunk about 32” above the ground and hollow out a bowl-shaped inside the remaining stub, Water will accumulate in the bowl, the reservoir will refill, so remove, strain and store the collected water. The first drain of water may have too much tannin in it. Afterward, the refilling water should be drinkable for up to 4 days.
Plant: Bananas and plantains – Musa
Found: Throughout the tropics
Characteristics: Growing up to (3-10 metres/ 9-30 feet). Leaves are broad and often split with an angular, squared effect.

Frozen regions
Melt small amounts at a time of snow or ice over a fire. Ice melts quicker than snow, producing more water quicker. If there is little fuel supply to melt ice and snow, collect the ice and snow and use body heat to melt it conserving fuel to sterilize it before drinking. Place ice or snow in a waterproof container and place between clothes (not directly on the skin). Another way is to hang snow in porous cloth over a container.
Icebergs are composed of fresh water. Old sea ice is virtually salt-free, unlike new sea ice.