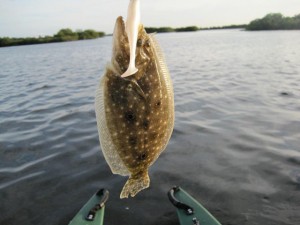 Winter flounder are strange looking fish. They are flat as a pancake and have two eyes on the same side of the head. They are actually born with one eye on each side, but as they grow to be adults the position changes. They are also a very dark colored fish, many times looking almost black. Flounder go out into deep waters where it is cooler in the summer but move back to shallow waters in the winter, dwelling in bays, estuaries, and rivers.

Flounder fishing can be done anywhere on the East Coast, from the southern states of South Carolina or Georgia all the way north to the southern portion of Labrador. Flounder are bottom-dwellers. You don’t need any expensive equipment for flounder fishing-just a bottom rig-pole, line, hook and a heavy sinker or more than one sinker. Flounder will go after live bait fish or squid. Just make sure to keep your line on the bottom. In some places trolling for flounder is successful.

Female winter flounder are larger than the male of the species. They can grow as large as 25 inches and weigh around eight pounds. Most flounder are in the 12 to 20-inch range. One of the greatest things about flounder fishing is that you can catch them anytime during the day, not just at dawn or dusk as for many fish. Generally, flounder fishing is during the months of May to February, as they reproduce from February to May, seeking out the absolute coldest waters they can find. In New England, for example, this means temperatures in the low to mid-thirties. Eggs are laid in clumps on the ocean bottom.

You can catch winter flounder from the shore, docks, or in your boat. Most people use a spinning rod with a 6-½ foot pole and monofilament line in the ten to the fifteen-pound range. You can attach the flounder hook a foot to a foot and a half below your sinker. A heavy sinker is needed to reach the bottom. Flounder like to be underneath objects so check out around docks and rock formations or any solid object on the bottom of the ocean.

You should never try to catch flounder with a stationary rod. Movement of the bait is necessary to attract them. They are also masters of nibbling off a piece of food without touching the hook, so don’t put too large a piece of bait on your hook. Winter flounder are exciting to catch with lightweight equipment. Be prepared for your catch by bringing a cooler full of ice. Flounder need to be in ice right after they are caught and iced until they brought home.
Just about everyone loves the taste of winter flounder. They can be baked, broiled, grilled, microwaved, steamed or fried. They are also delicious with vegetables and other foods and can be used for just about any fish dish you wish to make.