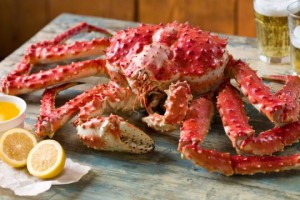 The first quota year was 2005, and many boats went out of business because they could not meet their expenses. The limited amount of king crab was supposed to bring higher prices, but the crab meat market was flooded with Russian king crab and prices went much lower than anticipated. In 2005, there were 250 crab boats operating, but that has now dropped to a low of 89. These boats range in size from forty feet to two hundred feet. . They cost several million dollars to buy and their operating expenses are hundreds of thousands of dollars each year.

Crab boats have a captain and several deckhands. Competition to land a job on these commercial fishing boats is keen, even though the crews work day and night through weather in the Bering Strait that is well below zero, and many times combined with high pounding wind and waves. The death rate among workers on these ships is ninety times higher than that of the average U.S. worker, and the highest of that in any industry.

Pay can be excellent, however, once you have established yourself on a ship. Crew members can make anywhere from zero to $50,000 for less than a month’s work. Pay is calculated based on the amount of Alaskan king crab caught, the market price, and what percentage is taken off the top by the boat owner to pay himself and cover his expenses. First-time crew members are often paid $150 a day. They have to pay for all of their gear, a commercial fishing license, and sometimes a percentage of the ship’s expenses.

The death rate while Alaska king crab fishing is 141.7 per 100,000 workers. King crabs are caught by taking seven hundred pound pots (traps), baiting them with squid, cod, sardines or herring and then lowering them 400 fathoms with a hydraulic lift down to the ocean floor. The pots are placed in a line, and each one is marked with a buoy. In a couple days, the boat returns, and the pots are hydraulically lifted back up to the ship.

Once aboard ship, the traps are sorted through and all female and juvenile crabs are thrown back into the ocean. Only males that are at least 6-½ inches or snow crabs that are 4 inches can be kept. Government inspectors are on board and oversee this process. Some of the really large operations have processing facilities right on board so that the crab can be sent to buyers directly from the ship. Crabs must be stored live in a holding tank until the ship reaches port. If they freeze, they are lost. If they have to stay too long in the tank, they can eat one another or be poisoned by the toxins from dead crabs.
In order to see how massive the Alaskan king crab fishing operation is, all you have to do is take a look at the yearly statistics. In 2004, 15.4 million pounds of Alaskan king crab was processed, with a dollar value of 65.8 million.